A dog headcollar, also commonly referred to as a dog head halter, is a form of walking aid.

The idea is that if your dog is pulling, they do so with their chest and body, but if it is their head and nose which feels the pressure of the pull, they are more likely to react. It is harmless and still allows them to eat and breathe.

For some people reading this, that will sound like a perfect way to make walkies more enjoyable. There are dozens of models out there, but these are the dog headcollars which we think are the best. 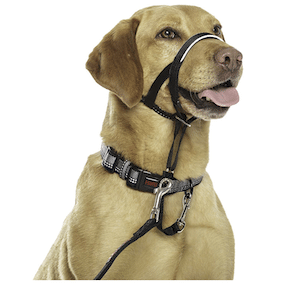 Halti is possibly the biggest brand when it comes to training harnesses, collars and head restraints. World-famous, it was the first-ever no-pull headcollar, and the fact it is still on sale shows its popularity (and that it works).

It is lightweight and padded, offering optimum comfort for your dog. Waterproof, it won’t become damp and uncomfortable for your dog when they are on a walk, and there is reflective webbing across the bands for when you are out past sunset.

A link attaches to your dog’s collar for extra safety, which is important if your dog has previously pulled and wrangled their way out of a harness or collar. You can adjust the sizing to ensure the head halter is strong enough without being too tight for them to drink, pant or eat while wearing it.

Available in five different sizes, you can purchase the size to match your Yorkie just as well as your St Bernard. It is also available in both black and red to match other accessories. 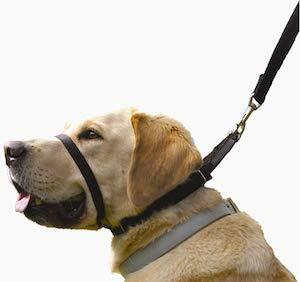 The favoured training head collar of the UK Association of Guide Dogs for the Blind and used by trainers, training schools, rescue shelters, veterinarians and dog owners alike. This is because it uses a revolutionary ‘behind the head’ design, as opposed to a regular head collar where the lead often attaches to the side instead.

Primarily referred to as a training collar as opposed to a restraining model, you can quickly and easily switch into a regular dog collar and lead by flicking the slip line on and off your dog’s nose. It sits higher than an ordinary collar so can be used in conjunction, if you need some extra security by fastening them all together.

It is kind and safe and does not cause any jerking or sudden harsh movements. There is no chance of it riding upwards towards your dog’s eyes, and it is simple to fit by slipping over your dog’s head and snout so there are no time-consuming buckles or fastenings. 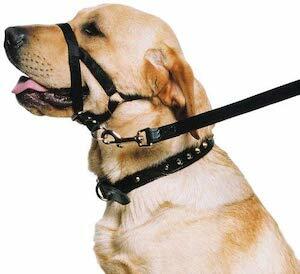 Able to be used as a permanent training collar on overactive pups, this headcollar comes with training tips on how best to use it as well as the addition of a safety link so it can attach to their collar.

This will keep them under control if they happen to remove their head harness. There are four sizes available ranging from a suitable fit for a Toy Poodle to a Labrador. They are generous in size, so it is recommended that if you are in between sizes opt for the one down as the snout can be freely adjusted anyway. 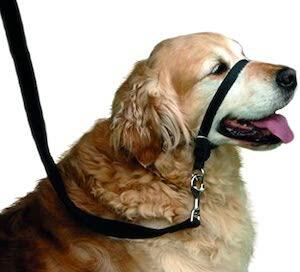 The Gentle Leader is a bestseller, endorsed by animal behaviourists and really soft and gentle on your dog’s nose.

Suitable for use from eight weeks old, it is the perfect head collar to get them walking perfectly right from the very start if they tend to get a bit overexcited. It works like a halter on a horse, pulling their nose and face a certain way thanks to the fact the lead attaches to the bottom of their chin.

Gentle pressure is transferred to the back of the neck when there is a pull, naturally stimulating a relaxation response. It is similar to when a mother dog carries their pup by the scruff of the neck.

It also comes with an informative training guide so you can learn how to get the most out of the collar and any tips which may help you out if you are at your wit’s end. Made from a soft weave for comfort, your dog should quickly get used to wearing it. 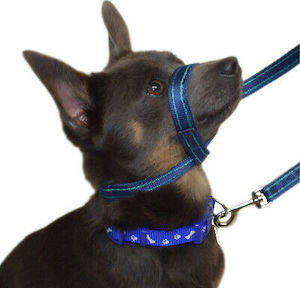 A figure 8 design which is perfect if your dog generally walks off the lead, but you may need to slip on a head collar to cross roads or in busy areas as they detest walking on a lead.

It comes as one piece from the head slip to the handle at the other end so can be used as a secondary lead. There is a clip which can fasten onto their collar in case they try to slip their way out of the arrangement.

You also have the option to attach a second collar to the other side of the headcollar, so you can steer your dog a bit like a horse if you need to keep them on the straight and narrow.

It will not pull up into their eyes, and there is no sharp tugging which could be uncomfortable or even dangerous for your pup. The benefit of this style is that one size fits all breeds, and it is also machine washable at 40 degrees as it is a simple makeup so can be kept clean and hygienic around your dog’s face.

A head collar is primarily seen as a training aid. When your dog pulls against their lead they feel the pressure on their nose and snout as opposed to on their chest or body. This can make them react to the pulling more, and also may mean that they shouldn’t just pull against the pressure.

There is often a way to fit them to a collar or harness for extra security, and there will be a size available for your dog breed and shape.

These come in a figure 8 shape as the name suggests, and the largest part goes around your dog’s neck, where you then raise the end loop and put this over their snout. The collar part and nose part are separated by a buckle which allows the headcollar to go looser or tighter with pressure.

Unlike a slip lead, which we have discussed below, the part around the neck will not place pressure on their throat. They also differ from a head collar because most attach to your lead from the back, so don’t pull on the side of their head.

A figure 8 headcollar is easier to put on than most dedicated head collars, so could be good if you need to slip it on and off during a walk or if your dog won’t sit still long enough for you to put something more complicated on and adjust it.

A slip lead is similar to an ordinary lead, except it has a loop on one end rather than a clip to go on a collar or harness. This means that the collar part can go tighter or looser depending on how much they pull.

They can be used as temporary connections from a dog to an owner, say after a walk until you have crossed a busy road, but should never be used on a pulling dog as it can cause too much pressure on their neck.

In the past, they have been used as headcollars by some dog owners. They would work in a similar way to a Figure 8 head collar by twisting around the snout, except there is often no limiter on how tight the lead can go. They also can restrict the dog’s throat due to the way they twist up to the snout.

For this reason, we would always recommend buying a dedicated headcollar which can be used in the proper way.

The majority of headcollars are made from nylon, which is soft around your dog’s nose and face. If your dog pulls along, you may wish to look for a headcollar which is padded or fleece to give even more protection.

There are some variations out there, such as leather headcollars.

Headcollars are not an immediate fix for your dogs pulling and bad walking. They help the dog to react and become more aware of their pulling, but when you remove the head collar, they can just as easily go back to pulling if they have not actually been trained alongside their use.

They can also still pull, but just not as strongly. We suggest still using methods such as clickers, treats and lead adjustment alongside the use of headcollars, and also recommend buying a no-pull harness and adjustable lead for full control.

Your dog may try to remove the head collar at first, but if you resist and reward them for wearing it, you will see results.

How Does A Headcollar Work?

When a dog pulls, if they are wearing a harness, the pressure is against their chest. Depending on how strong your dog is, holding them back can stop the pull from being so strong but they may be able to push through it. After all, most breeds charge through with their bodies.

However, with a headcollar, the pressure is against their snout. This keeps their head upright and they can’t put as much force against the restriction, so are more likely to react and get calmer.

They are similar to the head collars used on a horse, too. Where the dog’s nose points, they follow, so they are great for controlling dogs who often jaunt to one side to sniff or would happily cart you off through the muddy field when you’re trying to stick to the path.

Will A Head Halter Come Off?

They should remain secure around your dog’s face because of the way they are fastened on and because of the shape of their head. But the idea is that they become tighter if your dog pulls – which means they can be slack if your dog is walking well.

They are also made of thinner materials than a collar or harness. Because of this, look for a headcollar which features a link which can attach to their collar or harness, for extra security. You may also wish to use two leads, or buy a double-ended training lead.

Do Headcollars Stop Dogs From Biting?

The idea of a head collar is that their snout feels a tug if they pull on the lead. They can still open their mouth to pant and cool down, to take a drink and to accept treats.

A head collar is not to prevent your dog from biting. If your dog is aggressive on a walk towards other dogs or people, you should first and foremost try to tackle the issue before taking them out into public again, possibly talking to your vet or getting professional help.

Never think that a headcollar is to stop dogs biting if you see them out in public either. There are dedicated muzzles available if your dog is aggressive, but should be used with precautions.