Unfortunately, not everyone is born an athlete and so for those of us who throw like a toddler on a bad day, we’re often a huge disappointment to our dogs.

Rather than flinging their toys and tennis balls Herculean distances during a game of fetch, we’re much more likely to pathetically toss it a few centimetres, which is frustratingly neither good fun nor good exercise for our pups.

And even if you’re bordering on a baseball pitcher when it comes to firing out fetch tasks, it ain’t half tiring on the old arm.

In short, we’re all bored of throwing balls… and we want machines and contraptions to start doing it all for us.

While catapult models have long been on the market, dog ball launchers are now advancing all the time, meaning you can play fetch with a firearm or avoid playing altogether thanks to handy automatic, interactive toys!

So relax that arm, because we’re here to help you find the very best dog ball launcher that does all the hard work for you!

A new and improved twist on the classic manual dog ball launcher, this extendable Serve ‘N’ Sling device offers extreme power and ease of use.

Rather than buying a fixed-length launcher, this retractable model allows you to change the length of the arm allowing for greater control over how far you throw, making fetch a suitable game no matter what type of area you find yourself in!

More importantly, it also means you can cater for several sizes of dog at once, as small and large dogs naturally cover much smaller or larger distances when exercising outdoors!

Offering a little something for us owners too, it also boasts an ergonomic handle for comfort and the grip end allows simple pick up without ever having to retrieve muddy balls with the hands again! 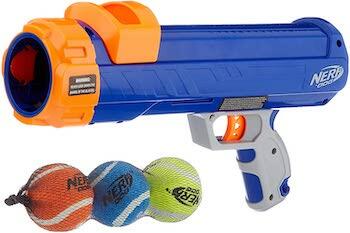 Possibly a little bit more fun for you than your dog, this Nerf Dog Tennis Ball Blaster is the perfect gift for canine-loving kids and a great way to spice up the bland nature of fetch and frisbee games with the family pup.

Compatible with any standard tennis ball, this lightweight and easy to carry bazooka can fire balls up to 50ft away but also allows you to dial things back for smaller dogs!

With hands-free pick up, you can reload without bending down or having to deal with slobbery balls and there’s no effort required either, as the balls are launched at the mere pulling of a trigger!

At 16 inches in length, it’s also not awkward to hold or carry and just a few inches longer than your standard ruler!

One of the funnest launchers on the market, it’s guaranteed to have kids and canines grinning from ear to ear!

Chuckit’s extra strength rubber balls are well known and revered for being some of the toughest, hard to chew dog toys on the market, making them perfect for big, boisterous dogs!

It’s only fitting then that their dog ball launchers are just as hard-wearing and high-quality, with ergonomic rubber handles for comfort and grip, as well as a flexible plastic design for longer-lasting flinging action!

Offering slobber free and standing pick up thanks to its effective gripper and long handle, they allow you to throw the ball further and faster than ever before, with Chuckits available in sizes from 12 to 26 inches long. This means you can always pick up the perfect launcher for you and your pup, with smaller devices offering shorter distances for ickle mutts and longer models taking care of the big boys!

Remember though that these different sizes can sometimes only accommodate certain balls, so it’s best to pair them up with the appropriate official Chuckit ball.

Don’t worry too much though, as each launcher comes with a free ball to ensure it’s ready to use from the moment of purchase! 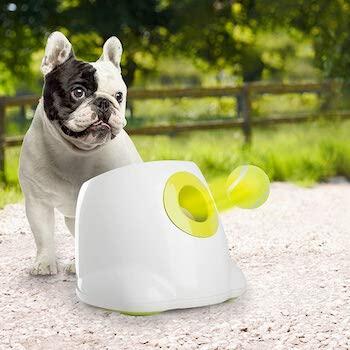 Automatic ball launchers are an increasingly popular and ever-present product, but this one from All For Paws is easily our favourite thanks to its wealth of dog-friendly features!

It’s an interactive tool, which stimulates a mutt’s mind and can help train them to play fetch with themselves, by placing balls in the launcher and watching them fire back out at will!

With an adjustable distance setting, the All for Paws is ideal for customising to yourself and your dog’s personal needs. At choices of 10ft, 20ft or 30ft launch power, you can help it appeal to both young and energetic or old and injured dogs, while also making it an indoors-safe toy should you want to use it in enclosed spaces!

Unlike a lot of automatic options, it’s also cost-efficient and yet still easily portable thanks to AC adapter and battery-powered operation, meaning you can plug-in and play at home but then can battery up when looking to launch on the move!

And best of all, you’ll never have to move a muscle! 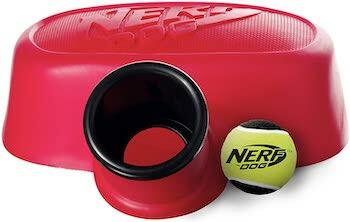 If you suffer from shoulder and arm issues, you’ll know there is nothing more annoying than trying to please a fetch-mad puppy on your daily walk, as their pleasure only ever results in your pain.

Although alleviating a lot of the effort, even manual launchers can be troublesome on the joints and that’s why this Dog Stomper Toy from Nerf is a revolutionary lifesaver thanks to its simple foot-activated action.

A hollow plastic pedal with an added ball funnel, a vacuum is created whenever a ball is placed inside the barrel, meaning all you have to do is a stamp (or stomp!) on the pedal to force air through the funnel and fire the ball off into the distance!

Incredibly, this almost no-effort action can send a ball flying for up to 75ft, which is much further than the average arm throw – especially if it’s a crocked one!

This bundle also comes with special rubber filled nerf dog balls, guaranteed to give you extra durability and longevity against teeth marks and aggressive chewers!

Which type of dog ball launcher you choose is very much dependent on how much effort you want to exert when playing fetch with your mutt!

These are a type of dog ball launcher that you are likely already very familiar with and will have seen clutched in the grip of nearly every other dog walker at your local park. A kind of long plastic slingshot, they require some slight effort to use but can fling a ball over 100 feet once you’ve got the knack, far further than the average arm! The best part about these launchers though is that they are cheap. They rely on physics rather than a fancy contraption or design, meaning they won’t set you back much more than a couple of quid!

Semi-automatic models are so-called because they require you to activate them with the press of a button  – but the launching action itself is done without you exerting any effort! These are more often than not ball-blasting guns designs, making them most popular with children and families who enjoy making dog walks a fun, altogether activity. They also provide quite a fair bit of range at just the pull of a trigger!

A relatively new invention for dogs, automatic launchers are very much in the mould of a tennis ball machine, allowing your dog to feed a ball into the device and then have it automatically fire it into the distance. Which of course, means you don’t have to do anything at all! However, teaching your dog this self-serving skill may take time and due to the technology on show here, they often cost far more than any other type of launcher. They’re also perhaps not the greatest for taking down the park and work better as an indoor toy or garden activity.

How physically fit are you and how much energy to do you want to exert on launching a tennis ball? That’s what you should be asking yourself before purchasing any launcher. Yes, manual offerings may be unbelievably cheap, but if you’re suffering from arthritis or arm issues, there’s no point picking one!

Dog’s love playing fetch with someone who can really help them put in the yards, so a launcher that can seriously fire or fling a ball to frightening distances should always be a priority. Some automatic models also have the option to change distances and angles, meaning you can please multiple dogs and perhaps avoid them running off in a direction they shouldn’t!

If desiring an automatic dog ball launcher, you’re going to have a very tough decision to make when considering power sources. Do you want the ease of being able to take you launcher everywhere with battery power? Or do you want the cost-efficient choice of a plug-in powered model?

Almost all dog ball launchers use the average tennis ball as their model, but this isn’t necessarily ideal for small breed dogs. For dinky dogs, try and find a launcher which utilises smaller sizes of ball, as they need to be able to get their chops around it! Opposingly, you also need to be careful you don’t buy balls and launchers which are too small for your dog, as they could swallow or get smaller balls lodged in their mouth or throat!

If you want to play ball games in more places than just down the park, you may want to consider a launcher which can also work in enclosed spaces. Suitability for indoors and outdoors tends to depend on a contraptions launch power, as hoying balls up to 100 feet indoors isn’t exactly a wise idea unless you live in a particularly large home!

Due to the various types available, dog ball launchers can range anywhere from £2 to £60 in price meaning there is both ultra-cheap options as well as more upscale choices.

How much should a dog ball launcher cost?

You can get a great quality manual dog ball launcher for as little as £5 in the UK and you shouldn’t ever have to pay much more than £15 for the best available.

Automatic ones are much pricier and will usually set you back a minimum of £40. We wouldn’t advise spending much more than £60 though, especially if they’re battery-powered as this means there is just going to be even more ongoing costs in the future.

Which is the best dog ball launcher?

The Nerf Stomp Dog Launcher is the best dog ball launcher as it is foot-activated, which offers a little less effort than manual arm-slinging devices. It also fires up to an impressive 75 feet, meaning it packs some serious power for very little effort! Unlike automatic models, it’s also a lot more portable, meaning it can be easily taken on walks.