The Best Dog-Friendly Cottages In Cornwall

A county which attracts 4 million visitors every year, it is no surprise that Cornwall has a huge pick of holiday rentals to choose from.

It’s England’s most popular holiday destination but isn’t just for humans. Miles of long sandy beaches and plenty of pet-friendly tourist attractions means it tops several lists for the most dog-friendly places in the UK, so it has to make the list of options for your next staycation.

Below are our picks of the best places to stay in Cornwall with your dog – all are safe, and in a great destination. 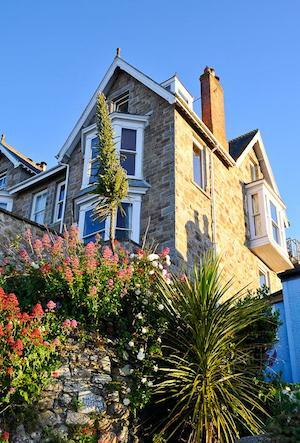 Pretty unbeatable views, thanks to three huge bay windows looking out onto the Atlantic. It is a cosy, traditional cottage which feels warm and homely.

There’s a gas-powered wood burning stove and everything you could possibly need is provided, which is brilliant if you can’t bring everything but the kitchen sink with you. The parking is a bonus, given that this is how most people will be getting to Cornwall and it can be in low supply (although a car is not needed for access).

The harbour and restaurants are all within walking distance, and dogs are very welcome – just enquire. Every room is a generous size, and St Ives is incredibly dog friendly as other reviews state. 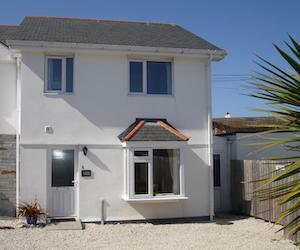 This is a 3 bedroom cottage, awarded a 4* rating from the Cornish Tourist Board. There are also 3 bathrooms, in case you’re a family who all need their own space.

There is ample space in each room, and there are plenty of extras to keep the whole family entertained when you’re not out exploring. Horse riding and water sports are also nearby.

The beach is only a minute’s walk away, and Harlyn Bay is approximately half a mile wide. The golden sand and remote feel are perfect for a relaxing break, and the beach is dog friendly all year round.

You get a private garden with high walls too, which is great for dogs who need somewhere secure. 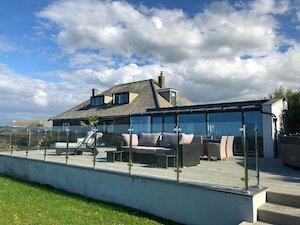 Do two or three families always get together for your staycation? Maybe you’re ditching the kids and want to take some friends (and not forget your four-legged friends too)?

This home in Harlyn Bay sleeps 11 people, with 5 bedrooms and bathrooms. It is 5 minutes away from the bay itself, with a sandy beach which is dog-friendly. Tregea is on an elevated, private site, so it is secure for the dogs and gated.

The 1.2-acre garden will give them plenty of space for zoomies and is equipped with garden furniture, a large gas BBQ, football posts, and many other features. Across the fields from the house are Rick Stein’s restaurant, as well as other restaurants and pubs.

A car is advised for access, and there is plenty of parking if you’re all travelling separately. 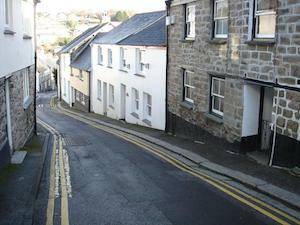 Located in old town Penryn, this house is a stone’s throw away from local amenities such as shops, restaurants and things to do.

A private garden with tropical touches will make you really appreciate the nice weather (but will be lovely if you’re there in winter, too). There is some really interesting decor, which is perfect if you’re after something a bit different.

You have everything which you’d need for your stay in the kitchen, and it is only a short walk to the harbour. Falmouth is a 5 minutes drive away if you do want to pick up your car keys, however.

It is all open plan and spacious, so you and your dog will have plenty of space. 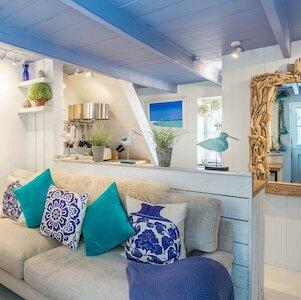 After something a bit more personal for a couple (and your fur baby)? This property is small but ideal.

It is very modern yet has plenty of coastal touches, such as sea-inspired decor and in a great location close to the sea and St Ives Bay. Black Moon is situated just around the corner from Porthmeor Beach and there are loads of other amenities within walking distance.

Small to medium pets are charged at £30 per pet per week and they are not allowed upstairs or on any of the furniture. Dogs are welcome on this beach except between 15th May and 30 September.

There is parking underneath the property but it is only really good for small cars, but a private secure parking area is available at an extra cost or the Island car park is a public car park in St Ives. 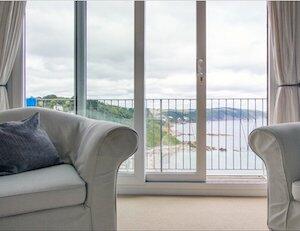 Uninterrupted views of the coast make this a perfect property if you want a slice of Cornwall on your doorstep at all times – in fact, they’re probably some of the best you’d get in the whole of Looe.

There are two bedrooms and it sleeps up to 5 people. Everything is in the property which you would need for your stay, and there is plenty to do inside if you want a restful break in between exploring the local area.

There’s a terraced garden at the back of the property and decking area with your own large family picnic bench and BBQ. You also get a private balcony to make the most of the views of the coast.

Well behaved dogs are welcome, and as you can see from the pictures, they have plenty of beaches and coastal paths to explore with you. 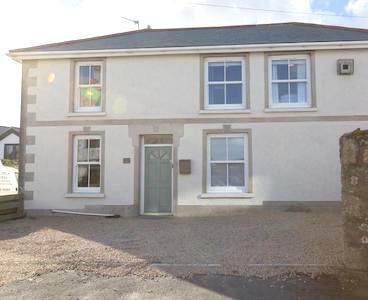 Overlooking Porthmeor beach, this is a great place to stay if you’re looking for a home away from home with private outdoor space, which is just everything you’d want.

There is parking for two vehicles which is great if you’re having to take two cars, and 3 bedrooms mean there is ample room for a family or meetup. Porthmeor is a Blue Flag beach, and dogs are allowed out of season.

5 minutes away in St Ives are a host of restaurants, pubs and shops, and you have an outdoor decking area as well as dining equipment if you’d rather stay in with your pooch. Small to medium dogs are allowed if they stay downstairs, and can’t be left unattended. You will be charged £25 for each dog. 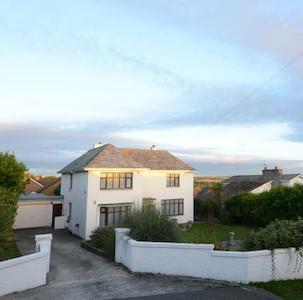 Want somewhere quiet and a bit more tucked out of the way but still within easy reach of amenities?

Quesnelle is ideally situated for the Gannel Estuary, Crantock beach, Newquay golf course and the world-famous Fistral beach. It really feels like a proper home if this is what you are after, with plenty of kitchen and living facilities.

There are two spacious gardens front and rear which is great for dog owners, and there are plenty of beaches, cliffs and other outdoor spaces nearby. It is also a great place for nature lovers to go, with the tidal river and its salt marshes being an important habitat for birds. 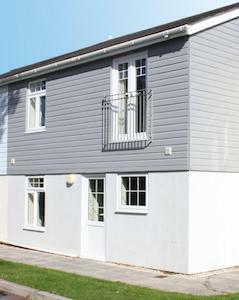 This house is something a bit different. It is a 4 bedroom house set in the grounds of a 17th Century manor estate with on-site facilities such as indoor and outdoor swimming pools, a golf course, tennis courts, gym, beauty & health spa, sauna, children’s play areas, restaurant and bars.

So, everything you could need is in one place and you don’t even need to leave the site. Great if you’re after a similar holiday to what you’d have abroad but are having to put up with a staycation at the moment.

Pets are allowed, and there are beaches close by as well as plenty of other tourist attractions. There is also plenty of space in the house for your dog to feel comfortable, and it is kid-friendly too.

A car is recommended as Newquay is 7 miles away, but taxis and buses are available as is car hire from the airport. 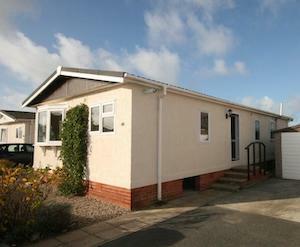 This is a well-equipped park home which is a great price, and which feels very ‘holiday-like’ if you want a break from the norm.

It is a prime location for anyone who will have their walking boots or flip flops on all of their stay, with seven sandy bays very close by, all linked by the National Trust coastal footpaths. Padstow is 5 miles away and the village of St Merryn 2 miles.

Newquay and Truro are a short distance away too, as are The Eden Project and The Lost Gardens of Heligan. Perfect for anybody who is an outdoor enthusiast or who wants to try and see as much as Cornwall as possible.

The park has a good shop if you want to stay close for meals, and a lot of the beaches are dog friendly, with a nice secure back garden.

Where To Go In Cornwall

In terms of places to stay, you’re spoilt for choice. But, you may want to decide based on a few factors.

Padstow is great for foodies, with Rick Stein really having put the place on the map. It is also the start and end of the popular Camel Cycle Trail. Newquay is fabulous if you will be undertaking some water sports, as one of the best places for surfing in the UK. It has a lively atmosphere and plenty else to do, including Fistral Beach.

St Ives is rather traditional, keeping a quaintness but one of the hotspots for art and culture lovers (as home of The Barbara Hepworth Museum and Sculpture Garden). It’s also popular for families, with a lot of friendly beaches around. Truro is one of the busier areas – cafes, restaurants and independent shops will keep you busy during the days.

Looe is wonderfully scenic, with a harbour and plenty for the family to do. Explore the coastline on the South West Coast Path or take a boat to Looe Island, a nature reserve. Nearby, there’s also Wild Futures Monkey Sanctuary and Seaton Valley Country Park – although the dog may have to stay at ‘home’ for some of the destinations.

A fan of Doc Martin? Head to Port Isaac, which is where the popular TV show was filmed during its run. As you’ll know, it is bustling but has plenty of walking paths and non-car routes. Penzance is the home of the Minack Theatre, the world-famous open-air theatre in Porthcurno, near Land’s End, which hosts a season of plays and musicals from May to September.

You also have Falmouth, home to Pendennis Castle, which has defended Cornwall against foreign invasion since Tudor times. Bude Sea Pool is a part-natural, partially man-made tidal swimming pool on the beach and Fowey is often voted the best place in Cornwall for couples.

We said it would be difficult to narrow them down…

How To Get To Cornwall

High-speed train services run frequently from London Paddington station. There are also direct trains from Bath and Bristol to Cornwall and its branch lines. CrossCountry operate trains from the Midlands, the north of England and Scotland.

You may have to travel to a larger station before taking a branch route to anywhere smaller.

From London, take the M4. From Manchester, it is the M6. Then, the M5 to Exeter (or take the M3 and the A303 across Salisbury Plain) and finally either the A30 (mostly dual carriageway) or the A38 through Plymouth and Saltash into South East Cornwall.

In peak season, the roads can get very busy, especially as many weren’t originally built to accommodate so many visitors. So, we would recommend travelling at night or non-peak hours during the week.

Cornwall Airport Newquay is the nearest option. It is served by local routes, as well as some services from Ireland, Germany and Spain.

Plymouth is the closest port to Cornwall being just across the River Tamar if you’re coming from Spain or France. This may be the best dog-friendly option.