Trimming our cat’s claws probably ranks as one of the worst jobs when it comes to caring for your pet. Not only can it be quite a strain, but it isn’t enjoyable for either party.

Yet it must be done to keep them in check, and investing in a really good pair of clippers can make the process a little bit smoother and easier. Not only will it get the job done faster, but the claws are less likely to bleed, become infected or split which causes future issues.

There are nail grinders out there which can file your pet’s nails, although this can make for a stressful experience so we have stuck to mostly scissor and plier-style clippers for our reviews of the best cat claw clippers. 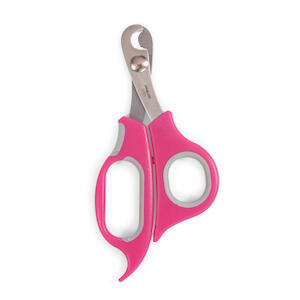 Easy for you to use as well as less stressful for your cat, these scissor-style clippers feel strong and substantial to ensure comfort at both ends.

Easy to grip rubber handles make it easier for you to control their movement and positioning, which is important when making the cutting action. Blades are nice and sharp, so the cutting will actually take place too. 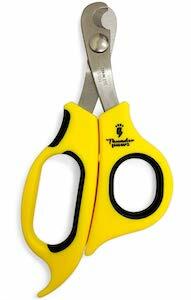 These clippers are used by groomers and vets alike, so you instantly know they are quality and up for the task.

With an angled tip, you are sure to get the best results each and every time, no matter the shape and length of the claws. It also means it is a one-action job, so you won’t have to make a few little cuts to get through it. The risk of overcutting is also reduced.

Ensure you get the Cat version – the medium size will likely be far too large for small claws. 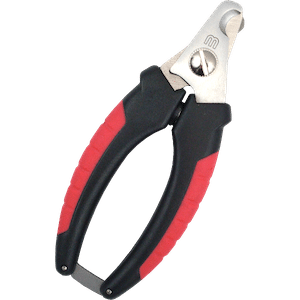 These clippers are used by groomers and vets alike, so you instantly know they are quality and up for the task.

With an angled tip, you are sure to get the best results each and every time, no matter the shape and length of the claws. It also means it is a one-action job, so you won’t have to make a few little cuts to get through it. The risk of overcutting is also reduced, and there is a safety guard so you won’t cut too extremely.

Ensure you get the Cat version – the medium size will likely be far too large for small claws.

With optimised cutting for the perfect (yet safest) cut, these clippers are unsurprisingly used by professionals and vets.

The ergonomic handles are easy to grip, and as they are coated in rubber, your hand won’t slip from them. Thanks to the safety protective guard, their claws won’t be cut too short, and they lock when not in use for safer storage.

They’re a great price, especially as if you are comfortable using them, they will be much cheaper that professional grooming in the long run. 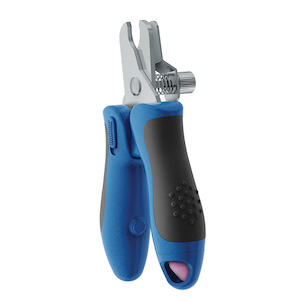 Even though we said filers aren’t great and can be a bit scary for your cat, this is a 2-in-1 which will do both jobs depending on the mood your cat is in.

There is an adjustable guard so you can limit the amount which can be cut off. This is a good idea for anyone who is starting out and means that any length claws can be cut.

The high-speed rotary file can just add the finishing touches to each claw, either smoothing it or just ensuring there are no sharp edges left behind.

This comes broadly under four sub-categories and mostly refers to the manner in which the clippers are used.

Look just like a pair of small nail scissors. Good for cutting off a small part of the nail or tidying it up, or as a starter product

Can be easier to control compared to scissors as they don’t open as wide. They are often firmer too

Just like with humans, these are best just to tidy up a claw such as getting rid of any sharp edges rather than cutting the claw back. With the noise and sensation, they may be too much for some cats to cope with

People often find these the most difficult to use, although they can give the best results. The claw is placed into a small hole, and then the clipping action takes off the end of the claw

Why do cat claws need to be trimmed?

Everybody knows that dog’s claws need to be kept intact, but it is just the same for cats too.

Can I just use human nail clippers?

People do, but it is really not recommended. They often aren’t the right shape, they aren’t made for the same material and they often aren’t sharp enough. This could cause the claw to split or make the process much more difficult.

They can also be harder to manage for such a small job, and you don’t want to risk any faults or accidents.

How much should I spend?

A decent pair of cat claw clippers can be bought for as little as £5, so they are not an expensive item to have to hand. The top price doesn’t go much more than £10, so the important thing to think about is how comfortable they look to hold, how you feel your cat will react and how easy they look to operate.

Why You Should Never Declaw Your Cat

How To Trim A Cat’s Claws