Interactive toys are a fabulous way to stimulate your cat while giving in to all of their natural instincts.

They want to be able to hunt something down, move and run around and be teased. Interactive toys are often unpredictable, specially designed to keep your cat on its toes, and then reward them with some form of interaction when the toy is ‘caught’.

This can be in the form of movement, treats, sounds or smells. You may want to pick something which can do all of these, or just stick to one reward. Here are the best interactive cat toys available from the vast selection online. 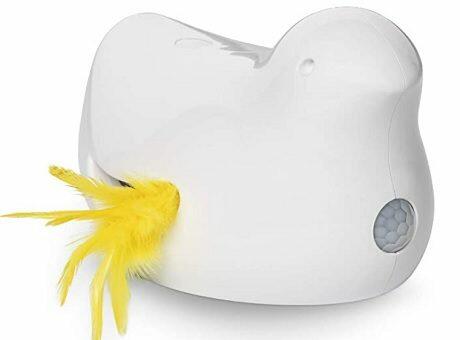 With a good 10 minutes of playing time, the interactive Peek-A-Bird toy will give you plenty of rest bite as your cat stays occupied.

You can set the bird to a One-Time-Play or Play-All-Day mode, which will turn on automatically through motion sensor activation, so your cat will be challenged to catch the feather every time it walks past.

There is an automatic shut off after the 10-minute play session to conserve battery, and the toy comes with an extra feather head in case one gets damaged. 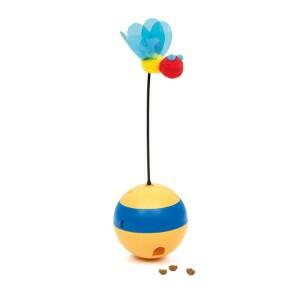 A brilliant all-round interactive toy with three functions to properly keep your cat occupied for ages.

Firstly, a flying bee sits on a pole and spins crazily as the toy moves around. While your kitty is trying to catch the bee, they’ll always have to defeat the laser beam light that comes out of the toy as well.

The space that allows the beam to come out is also a handy place for storing treats that your cat will have to work to get out as well.

With three things to accomplish, your feline friend is going to be a very busy kitty. 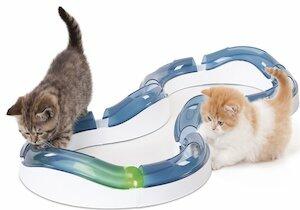 A large eight-piece track which will keep your cat occupied for ages, this game requires your cat’s participation to make the most out of it.

Large openings allow your cat to stick their paw inside and swipe at the 3.5cm diameter light-up ball, which is stuck inside so it can’t be removed but is within touching distance to keep your cat going. Each section of the track alternates the height, which adjusts the speed of the ball throughout to really keep them entertained.

The fact that the ball lights up is not just good for catching their eye, but also good for any cats who tend to really wake up at night when the rest of the house is asleep. There is nothing to stop you adding another ball if you really want to give them a challenge or a smaller one which they can remove if they seem to get frustrated by it. 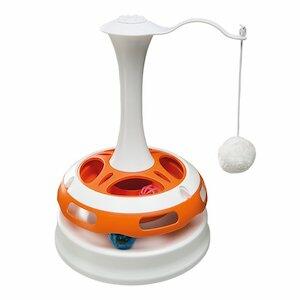 Has your cat previously gone through dozens of interactive toys, either because they have been too clever for them or because they’re not quite strong enough for their tough behaviour?

This is an entertainment hub for all cats, with a large central column which has a pompom dangling from it, to start off the inquisitive behaviour. Once they are drawn in, there is an illuminated ball which can whizz around the base when your cat hits it with their paw, as well as a ball on the upper section which will require them to navigate some holes.

The anti-slip base is good for any cats who often bring standing toys toppling, and it feels sturdy when built too. Ferplast suggests to use it as part of a larger roller circuit, to add another dimension to the experience, but it is a great standalone too. 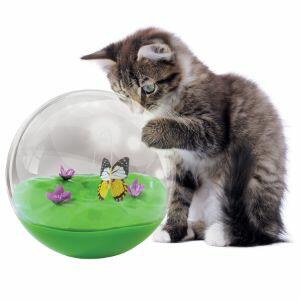 When your cat is just starting out in life, it can be really good to help keep them amused and focused to tire them out, but it can also be beneficial for them not to always have their ‘prey’ as a reward if you don’t want to end up with mice on the front doorstep.

Knowing they can tease the toy but not touch it can be a good way for them not to normalise always capturing prey, which will come in handy later in life when they are outside or around other animals.

This ball can be played with as normal, and as the weighted base wobbles, the sensors react to the activity and the wings begin to flutter, keeping your cat’s attention. The butterflies are incredibly realistic, with natural movements. 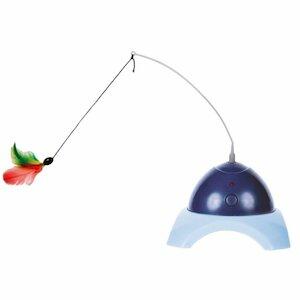 Appealing to a cat’s hunting instincts, this toy features a feather suspended by a rod so it is teasingly within reaching distance.

This rod is attached to a motor which causes it to revolve, so your cat will have to run around in circles after the feather to stop it in its tracks.

We love how there is a remote control with the toy, so you can sit on the comfort of the sofa while controlling the actions. After all, there is no point in tiring yourself out too, is there?

It is definitely not one to leave the cat unsupervised with, however, as if they pull the feather down, the base has a chance to flip as it isn’t too heavy. For this reason, we would say it is best for a kitten who isn’t too strong for it. 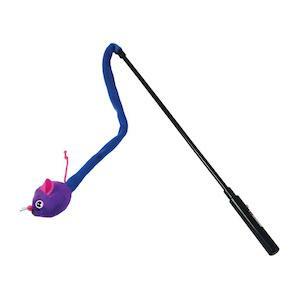 A laser disguised as a teaser toy, this snake will allow them to chase and run around by following the light which you point around the room, and then pounce on the mouse at the end of the stick when they need to get something in their paws.

The motion of the snake can be controlled by you, as can the laser, so you still have an element of control over the play (which could save your ornaments and sofas). As an added bonus, the toy is colourful, so will immediately draw your cat in. 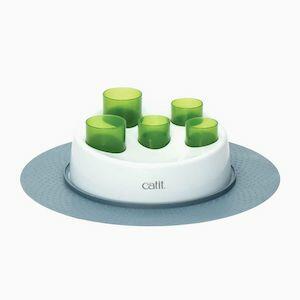 If treats are the way to your feline’s heart, hiding treats in the Digger can stimulate their natural pawing motion while rewarding them in the perfect way at the end.

There is a choice of three short, narrow tubes and two long, wide tubes so they have different challenges throughout the game. There is also a stable sloping base and a rubber mat on which to set the entire unit, so no matter how ferociously they dig, there will be no accidents.

The rounded tube ends make them safe to use and also easy to clean, and the entire unit can be used on its own or as part of the other Catit 2.0 products such as the roller circuits. 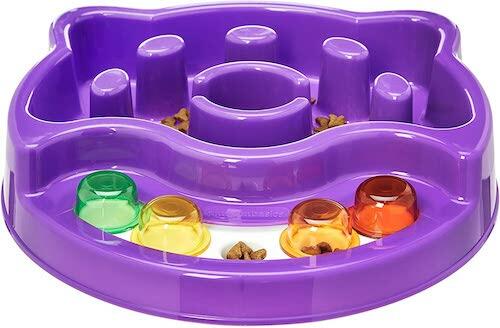 Able to incorporate food into their playtime, this activity centre is great for beginners and younger cats who are maybe having their first foray into interactive play.

It can help reduce boredom while building curiosity. Various movable sections are able to hide food, which will not only ensure they can remain entertained but can also slow down eating. Non-slip rubber feet will keep it in place, and the unit is made from durable polypropylene so can be wiped clean after every use.

It’s available in several colours, each with a slightly different design. 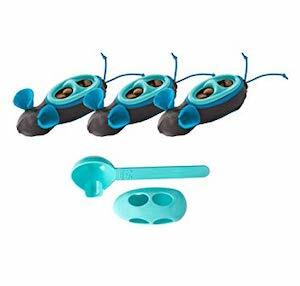 This award-winning feeding system, approved by vets around the world, is a brilliantly interactive way to get your cat searching for food as well as controlling their intake and the speed in which they eat.

The idea is that instead of filling their bowl, you fill the three mice and hide them around the house. Your cat will have to hunt them down and will be eating three small meals per day, as they would be more likely to in the wild.

Each mouse is covered in a special skin which is similar to the feel of prey, so your cat can grab it between their paws and shake it to get the food out while having their full hunting instincts fulfilled.

There are a few different types of interactive cat toy, but generally, this falls into how they are used. Some are motorised, so will create natural movement patterns when on which stimulate your cat and keep them entertained with their unpredictability. These don’t need any involvement from you so are great when you want to put your feet up.

Others require your cat to get involved in the game in order for there to be movement, such as hitting a ball with their paw or batting a pompom for it to swing around. There are others which require you to get involved, such as holding a stick or shining a laser.

The former will usually require batteries and will need you to turn them on, whereas the latter can usually be played with whenever the cat wishes, or when you feel like interacting, too.

Always supervise your cat when they are playing. If you want something which they can play with when you are not at home, it is best not going for anything which requires a power source, or anything which is tall and could topple over on top of them.

You should also ensure there is no wear and tear every day, such as seams coming undone or feathers becoming a bit tatty. If there is, throw away and replace.

What Makes A Toy Interactive?

This is anything which encourages the cat to interact and rewards them with movement, food or sounds.

They make it more likely that your cat will play with them for a prolonged amount of time, as they try to get different responses and tackle the challenging actions.

This is a point which has divided a lot of people.

Laser toys can really stimulate your cat’s need to chase and run around, as they become very focused on ‘catching’ the beam. They’re a good toy for anyone who has a very hyperactive cat but who can’t always be there to play with them.

But others argue that they are unfair. As it is just a light beam they are chasing, there is nothing actually there for them to grab, which could leave some very frustrated and increase their aggressiveness when it comes to playing with other toys (or even other cats).

In order to fulfil their hunting instinct, they may need to feel some ‘prey’ in their paws. Playing can also help them with bite inhibition and coordination, so having nothing there to bite or play with could mean these skills aren’t developed, affecting social skills in later life.

This is why we have picked out laser toys which also have the element of there being something to grab or tackle as an end reward. If you do use a laser on its own, try to incorporate other toys into the game.