There is quite a success story behind Leo, Charley and Me. What started out as a bit of a hobby for owner Kim soon developed into a booming business, which is able to raise funds for the charity who helped Charley before she joined the family.

Leo the labrador and Charley the spaniel are both the inspiration behind the name of the brand and the products. When out on a walk, Leo was attacked by another off lead dog and developed a fear of dogs when out, but after talking to a dog trainer, the family realised they may benefit from having another dog join the clan for companionship.

The family decided to adopt a rescue after having Leo from a puppy, and while looking found Spaniel Aid UK. Working cocker spaniel Charley had been mistreated in an inner-city home, but soon joined to make a duo, and the “very active, bouncy, noisy spaniel” quickly became inseparable from her older brother (and is able to make use of her new rural home and canalside walks).

As a thankyou to Spaniel Aid UK, 15% of all takings are donated to them so they can continue the important work they do rescuing and rehoming spaniels all over the UK and abroad.

Kim told us: “I’m delighted to say that during 2020 mainly due to the number of face masks we made we were able to donate £1600 to the charity which I know they are truly grateful for.” 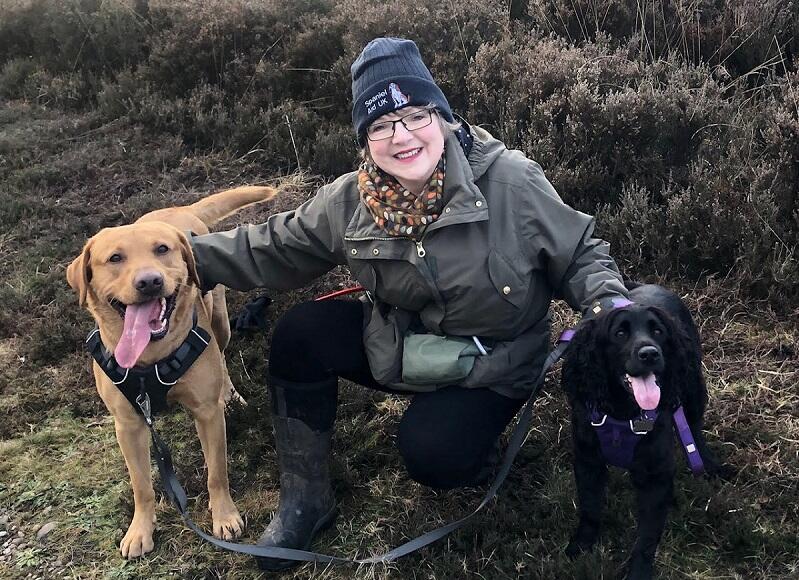 But it was Charley’s gender-neutral name, which she has had since she was a pup, which first gave Kim the idea behind making collars. Everybody thought she was a boy, but none of the feminine collars in the shops took Kim’s fancy. A childhood spent around sewing machines soon came in handy, and it felt like a natural progression to begin making dog accessories.

The business came at the perfect time for Kim, too. For many years, she has been living with an auto-immune condition called Sjogren’s Syndrome which took 10 years to diagnose.

“It causes issues with my digestive system and arthritis in most of my joints which are constantly inflamed and stiff. I also have problems with blurred vision.”

She then developed a heart condition three years ago, and a combination of not wanting to venture outside the home and rethinking what she and her husband wanted to do meant she started working part-time, and Leo joined the family.

“Exercise is good when you have rheumatoid arthritis as if you don’t move enough you get stiffer and stiffer but you also need to rest so cuddles with Leo on the sofa are also compulsory.”

Once Leo and Charley were seen out and about in their new accessories, friends and family started asking for some to be made too. The lightbulb moment came; over the next 12 months, thanks to attending local craft fairs and dog shows, the business grew and grew. Late 2019, Kim decided to leave her nursing job and develop Leo, Charley & Me full-time. 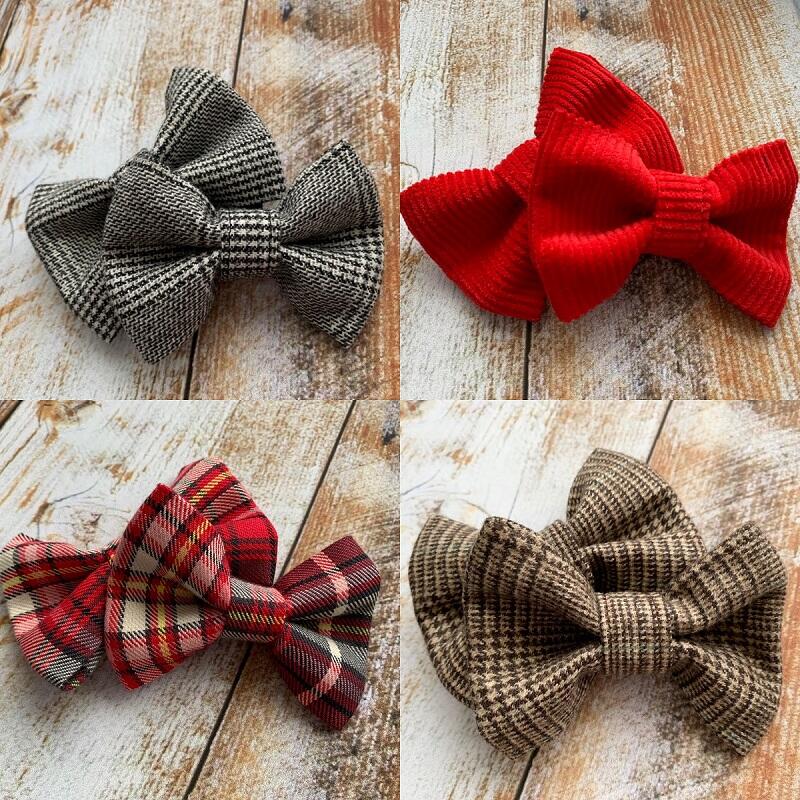 In October 2019, after completing a PR course run by Rachel Spencer, Kim had a much better understanding of how to become more visible with her brand.

Then, arguably one of the most famous dogs in the UK was spotted wearing one of her creations:

“I had noticed that Dilyn The Downing Street Dog was appearing on social media and in the press quite a bit in the run-up to the December election and he was hard at work on the campaign trail, canvassing with his owner Carrie Symonds.

It was so lovely to see anther rescue pup living his best life, so I sent him a present to Number 10 telling him he was doing a great job.

My son actually laughed at me saying that the parcel would never get past the security at Downing Street so I didn’t have any hopes of seeing the lovely turquoise Christmas Pudding collar, bandana, bow and lead set being worn by Dilyn.”

But just 10 days later, he was seen in it. Then, Boris took Dilyn to the polls on Election Day, again kitted out in his new accessories. Pictures of Boris kissing Dilyn (and some the other way round, too) were all over social media, and so Kim contacted the press.

Leo, Charley & Me went from being “invisible” to being on the world stage. Enquiries started coming in from all over the world, and her products were in the likes of the Daily Mail.

Here’s To The Future

During the first lockdown, the business pivoted slightly into making scrubs for the NHS. Kim’s daughter learnt how to sew, and they progressed from scrubs to reusable face masks (which allow owners to match with their pets in a very of-the-times manner). 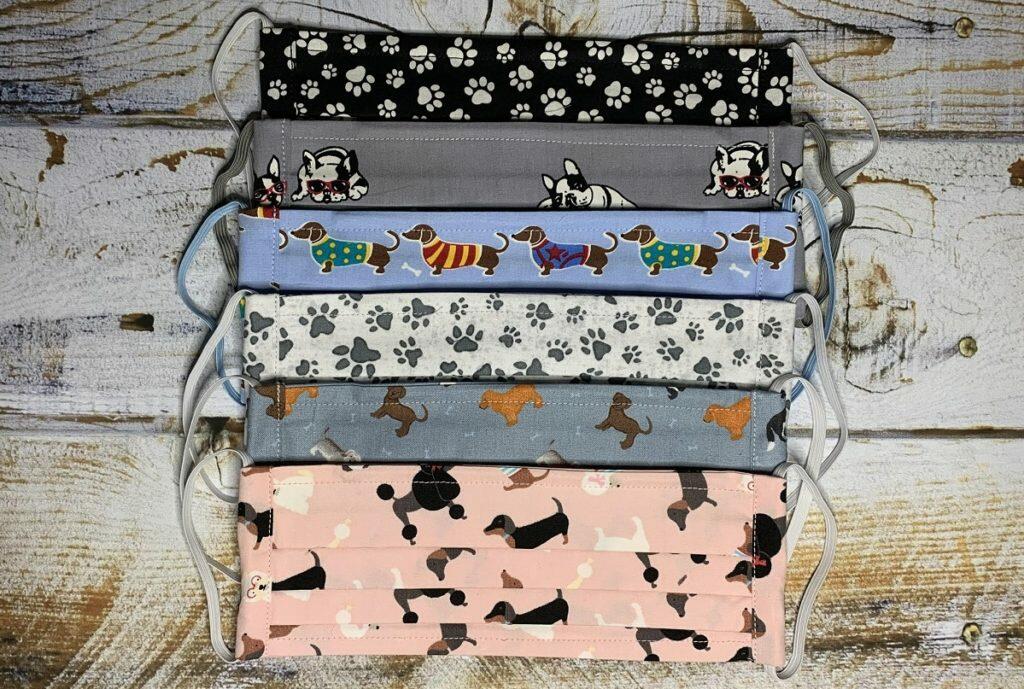 Four limited-edition collections are released every year, which are usually seasonal and include the Christmas range. Kim also turns the scrap material from suit making into one-off bows, for anyone who wants their pooch to truly stand out from the pack.

The next collection should be released in February as long as there are no difficulties getting fabric, and at a time when most people are thinking of retiring (Kim will turn 60 this year), the business has turned into a full-time adventure.

Below is a sneak peek of the range: 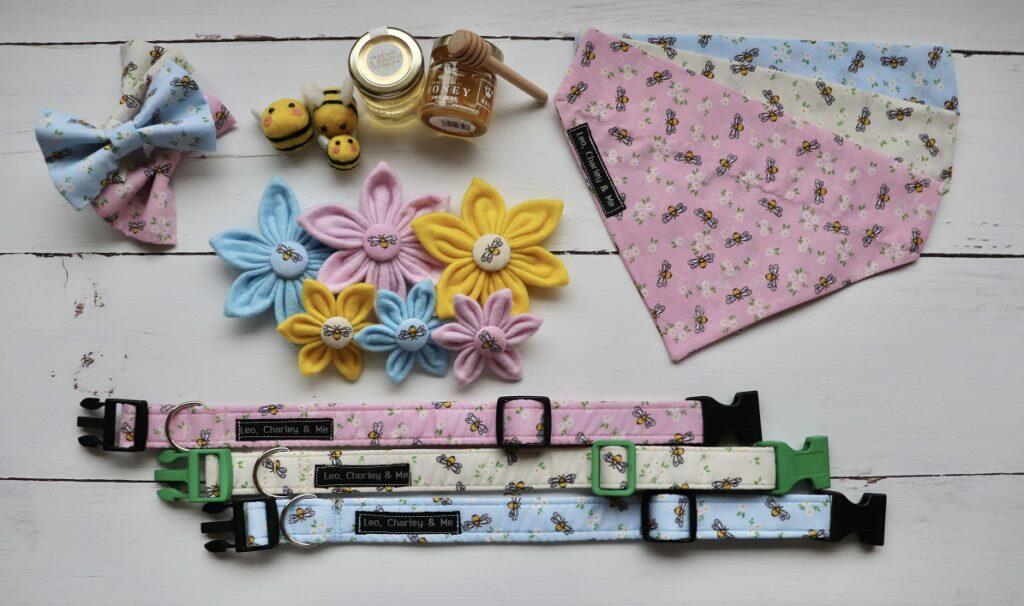 “I still sew at home in my son’s old bedroom, more often than not with the dogs at my feet, planning my day around their walks…and I love it!”

And let’s not forget Spaniel Aid UK – Kim and we at Petz have our fingers crossed that the total raised for them in 2021 will be just as good!