Spaying & Neutering: What You Need to Know

Spay or neuter surgeries are one of the most common procedures given to cats and dogs by their owners. They’re also one of the most responsible ways to care for your animal.

First-time cat and dog owners often have a lot of questions about the process, especially when it comes to the cost, whether it’s truly beneficial and how to care for them post-procedure (tip: a VetBed will come in handy, and you may also need an inflatable collar).

Here is a definitive guide to the procedures, and why getting one might well be the best thing you ever do for your pet.

Spaying vs. Neutering: What’s the difference?

Whether you’re looking to spay or neuter your pet depends entirely on their sex.

A female pet is spayed when a vet removes their ovaries and sometimes their uterus, meaning they can no longer reproduce. The procedure also ends your pet’s heat cycle and can often stop associated breeding behaviours, although this is not a guarantee of the spaying process.

You can choose for your female pet to have an ovariohysterectomy, in which both uterus and ovaries are removed, or an ovariectomy, where only the ovaries are taken out.

Neutering is a much more simple process in which a male pet’s testicles are castrated, rendering them unable to reproduce. Similarly, this can put a stop to unwanted breeding behaviours like humping but is again not a guarantee.

Vasectomies (a process in which the tubes conducting sperm are severed) are also available to male cats and dogs but are not commonly performed. 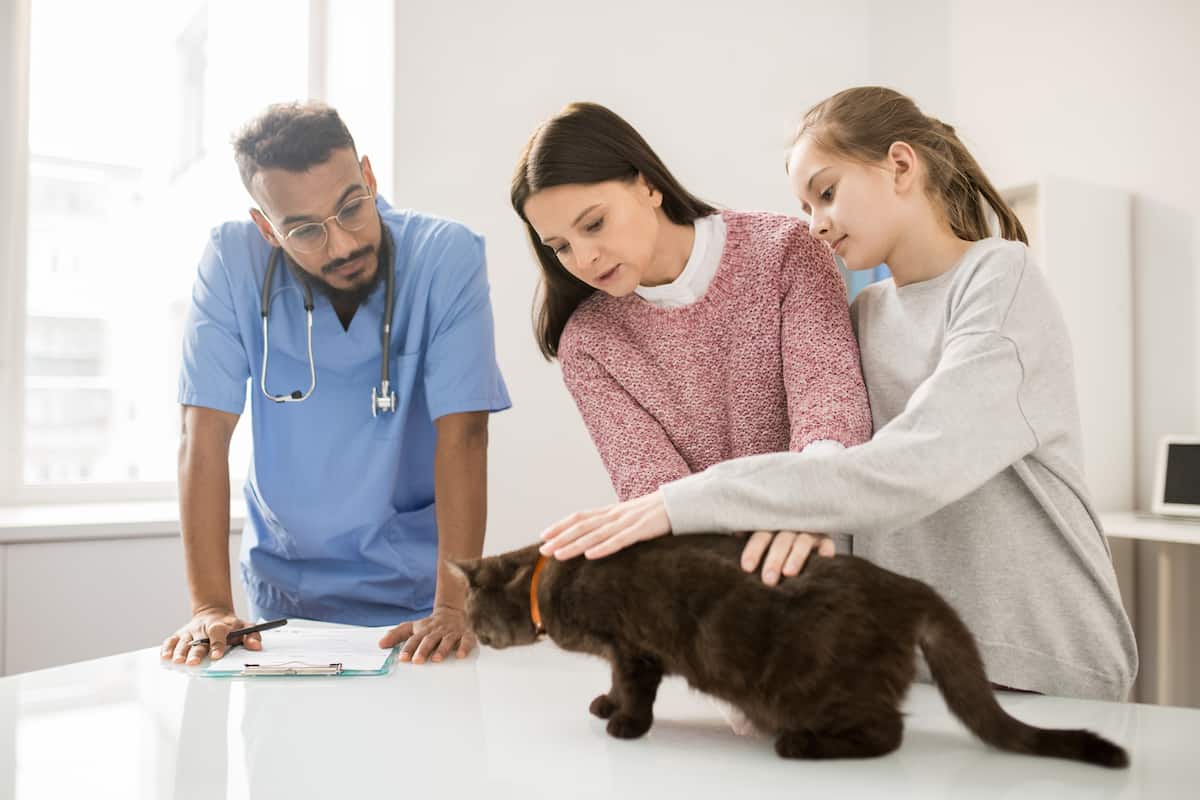 Reasons to spay or neuter your pet

Spaying and neutering are very common, and the benefits go way beyond preventing unwanted offspring.

One of the key reasons to consider neutering or spaying your pet is the incredible health benefits the procedure provides, which can often help increase your pet’s overall lifespan.

Spaying a female cat or dog can better prevent uterine and breast cancers, which are fatal in 90% of cats and 50% of dogs.

Similarly, neutering is the best course of preventing testicular cancer in your male pet.

Cat mating is not pretty and can result in injuries such as biting and scratching. Unneutered male cats are often violent towards females when mating, so it is good to neuter males to prevent this as well as spaying females to limit the attempts of males trying to breed with your female.

Unneutered and unspayed male and female cats can also be aggressive because of protecting their territory. An unneutered male who has FIV (Feline Aids) can spread the disease through biting when fighting. A neutered cat is less likely to fight or be targeted.

Spaying will also end a female cat or dog’s heat cycle, which is often a very stressful time for your animal.
While dogs go into heat no more than three times a year, cats often go into heat much more due to their six month mating season.

This can mean plenty of spikes in unwanted behaviour such as yowling for mates, frequent urination and sometimes aggressive behaviour, which spaying will help put a stop too.

Stops pets roaming away from home

While cat owners are used to their felines far roaming activities, dog owners might be surprised to find an unneutered dog will roam even further to find potential mates. If they can find a way to escape your home, they will, increasing their risk of injury on busy roads.

This could be dangerous if you take them on walks and they are off the lead particularly. For cats, they may not return home for hours, causing a lot of worries.

The general behaviour of a male animal will also improve remarkably as their focus becomes not on mating, but interacting with their family.

Unneutered dogs and cats often suffer from aggression problems, especially when coming across other males. Unlucky owners may also have to deal with them marking their territory with strong-smelling urine around the home. 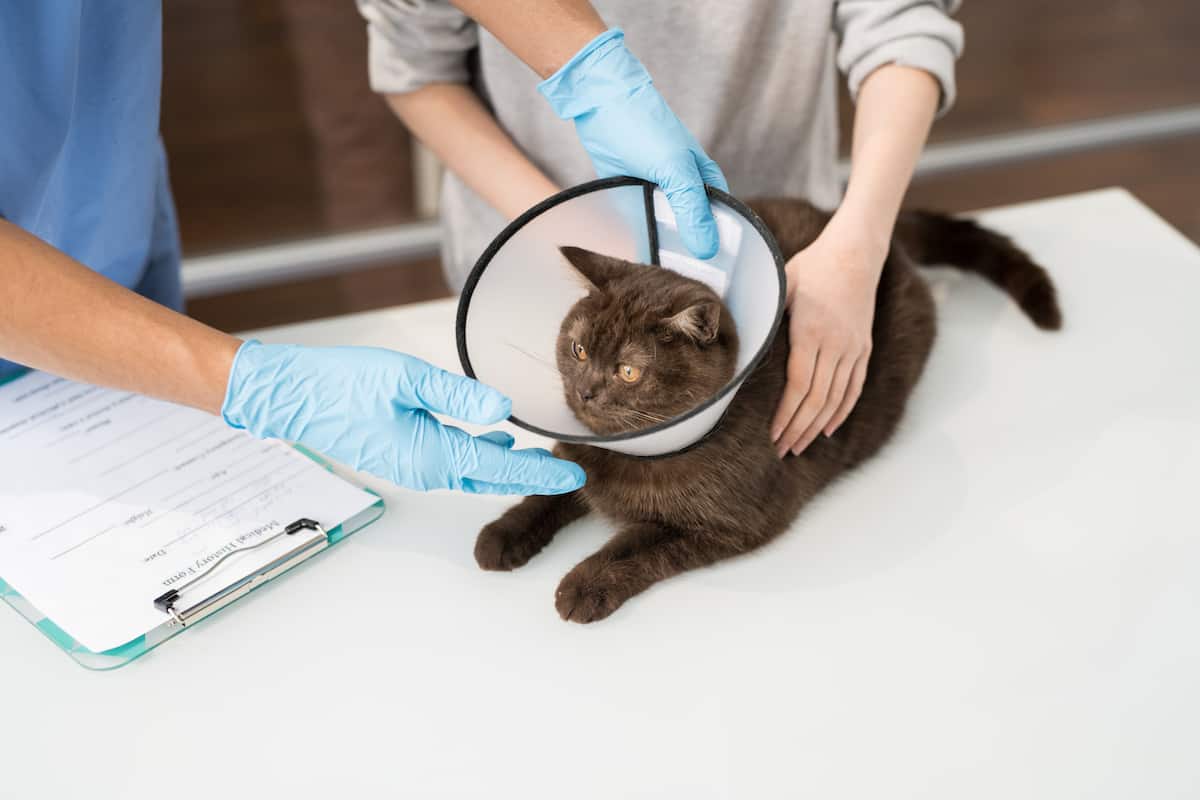 One of the best things about spaying and neutering your pet is that it helps fight against animal overpopulation.

These numbers are the reason why every year millions of cats and dogs end up unwanted in animal shelters or worse, euthanised as strays.

Unwanted stray animals often have negative effects on wildlife, damage local fauna and can even cause car accidents. Spaying or neutering your animal stops the production of over-sized litters, and therefore reduces the number of animals on the streets.

Not only are you helping save your community by spaying or neutering a pet, but you’re also saving yourself some money too!

The cost of one spay/neuter surgery is far less than the stress and price of caring for a new litter. An unneutered animal is also more prone to some illnesses which could be costly to treat.

When should I neuter or spay my pet?

It is recommended that females cats and dogs be spayed before their first heat cycle to help best prevent against reproductive diseases later in life. However, you should always talk to your veterinarian to determine the best time for your individual pet. Some may recommend leaving it until after their first season.

You cannot spay a bitch while she is in heat due to the increased risk of bleeding. The surgery can be performed after around 2-3 months.

Cats are generally spayed or neutered between four and six months. This is the responsibility of the owner if they have adopted the cat as a kitten. Surgery is often performed in animal shelters before rehoming if you go through a rescue. It’s also possible to spay a female cat while she’s in heat so don’t worry if they’ve already started their cycle.

While the traditional age for neutering dogs is four to six months, puppies as young as two months old can be neutered as long as they’re healthy.

Neutering or spaying is a procedure that can also be done later in life for adult pets. But while generally safe, there is a higher risk of post-operative complications.

Cost of spaying or neutering

To get the most accurate price, talk to the vet who will most likely be performing the procedure for your pet.

Unfortunately for dog owners, the price can vary depending on the size and breed of your pet. On average, the cost for neutering a male dog can be anywhere between £110 to £300, while spaying a female ranges between £130 to £365.

Prices range so heavily due to the varying sizes of dog. Larger dogs need more anaesthetic and surgery often takes slightly longer than with smaller breeds. 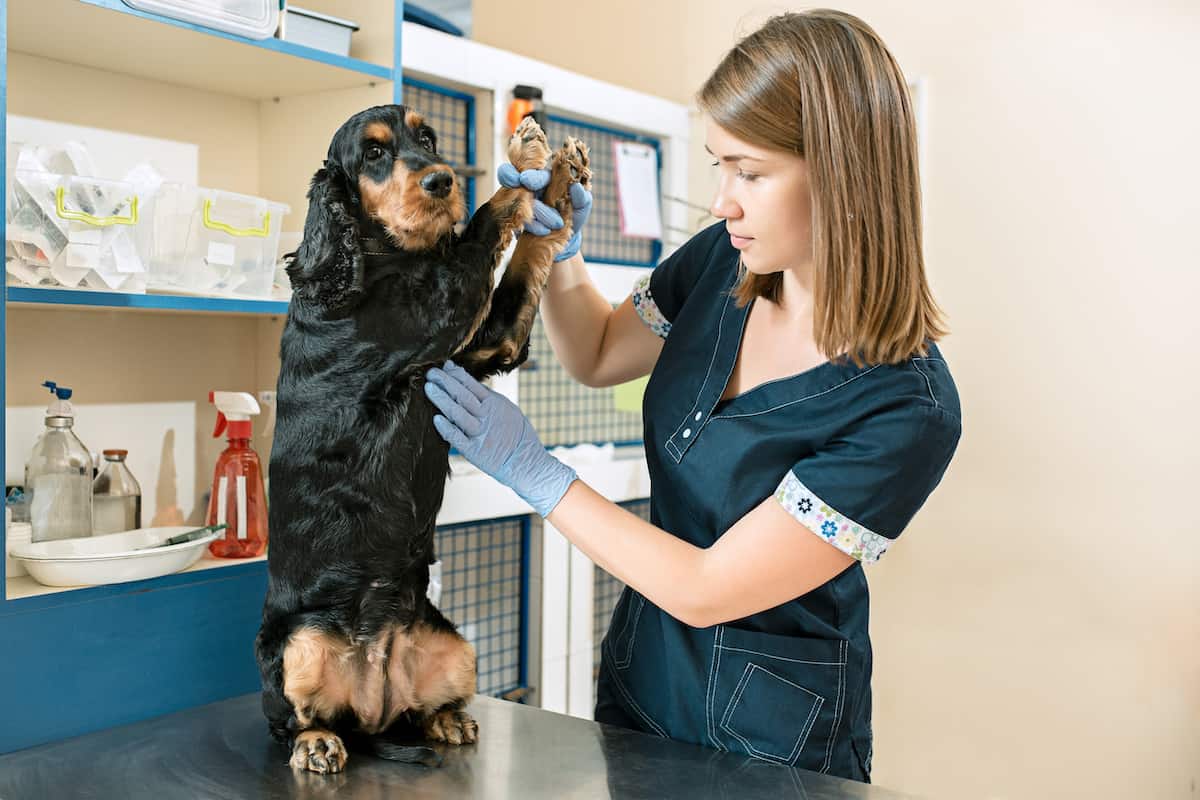 Most vets will often split their prices into weight bands, so you can expect to pay the lower end of the spectrum if your dog is under 10kg, and the higher end if your dog is over 50kg.

Spaying is more expensive than neutering for both dogs and cats due to the operation being a more complicated surgery, as it involves the removal of internal organs.

If you’re worried about the costs, many charities can offer subsidised or discounted neutering schemes based on means-tested benefits.

Contact the trusts below to see if you’re eligible:

Most rescue centres will also carry out the procedure as a given, and the adoption fee goes towards this.

How long does it take pets to heal from neutering?

Operations are done under general anaesthetic, so your pet won’t feel any pain at the time of their procedure, but like with any operation, they’ll need time to recover afterwards.

The average time taken for cats and dogs to heal from their spay/neuter operation is fourteen days.

You need to make sure your pet gets plenty of rest and avoids strenuous activity during this time, as otherwise their incisions may not heal properly and cause complications.

To best care for your pet after their surgery, visit our care guide for pets recovering from surgery.

What are the risks of spaying or neutering?

Although they are very common procedures, there is always a small degree of risk for any animal having surgery.

Because of the anaesthetic, some breeds with heart or breathing issues may not be able to have any surgery.

However, a vet will usually give your cat or dog a thorough physical exam before any surgery is performed, to ensure your pet is in the best health before any operations.

Should I let my animal have one litter before spaying them?

No! All the medical evidence suggests that spaying an animal before their first heat is the best way of preventing certain cancers. We also don’t need any more dogs and cats at risk of being without homes, and pregnancies and births can affect dogs negatively in terms of their health.

But what if I find good homes for all of my pet’s litter? You may well find ‘good’ homes for all of your pet’s puppies or kittens. However, once they are not in your care, you can never know how responsible their new owner is. Who’s to say they’ll go to the same effort of finding good homes if your pet’s kitten or puppy suddenly has a litter of their own? This is how so many millions of animals end up on the streets and in shelters.

Will neutering my cat or dog cause them to add on weight?

No! Pets add on weight because their owners feed them far too much and give them no exercise. Neutering or spaying them is never the reason for their weight gain!

Are there any benefits to not neutering my pet?

They won’t have to be put under general anaesthetic, but all vets check your pet is healthy before this is done anyway. There is also a risk of infection or bleeding when in surgery, but this is incredibly rare if performed by a registered qualified vet.

How long before I walk my dog after neutering?

We would recommend 24-48 hours before they are put under such physical strain.

How long does it take to neuter or spay an animal?

Most surgeries are performed as day cases, so your pet will be admitted first thing in the morning and then they can be picked up before closing.

The actual procedure is quite quick, but they are admitted and released over a long time to ensure they’re comfortable on either side of surgery.