6 Lizards That Are The Best For Beginners

If this is your first time buying a lizard and you’re not sure where to start, then don’t worry, we’ll talk you through a list of the friendliest, easiest and cutest lizards available to buy, so you can go forth and make a confident decision.

Before we get started, it’s important to consider a few things when buying a lizard. These reptiles can live up to twenty years, so it is a commitment if you’re buying one from an infant. Lizards also require a certain temperature and humidity conditions, but as daunting as that may sound, it’s pretty easy once you know the specifics and you can learn these once you decide which lizard is for you.

You’ve probably heard this a few times, but leopard geckos are by far one of the best lizards for first-time reptile owners. Not only are they small and friendly, but they’ve got adorable faces and are affectionate too. Leopard geckos are popular and have a big following, so you’d be able to find out any information you need in order to help you look after it. They only need moderate heating, so their enclosures are fairly easy to upkeep, and of course, they’re significantly smaller than some other reptiles making their house much less expensive. However, it is recommended to have a 20-gallon tank.

The only downside to leopard geckos is that they need live food, so a leopard gecko might not be a good idea if you’re squeamish. Adult geckos also shed their skin every four to eight weeks, so it’s important to do your research to know how to help this process. Leopard geckos lose their tails when they’re significantly stressed, which is important to keep in mind; however, the positive is that they regrow their tails, unlike crested geckos.

Bearded Dragons are the most popular choice for pet lizards, and it’s no surprise given their low maintenance and friendly, docile disposition. Since they’re omnivores, they don’t require live food and, for the large part, eat vegetables, so they’re a better option if the idea of live food makes you uncomfortable.

They’re quite a bit larger than leopard geckos, but because they’re so relaxed, they’re still easy to handle despite their size. Due to their relaxed nature, they also don’t mind being handled either, unlike some other lizards such as chameleons. Another pro of bearded dragons is that they’re awake in the day, unlike some other lizards, so you can spend time with them when you’re up as well.

The only downside to bearded dragons is that their poop is messy, so the enclosure needs to be cleaned every day. They also need a high amount of UVB lighting to stay warm, so you’re going to have to invest in quality lighting, and they do eat a lot of food, so because of this, bearded dragons might be more expensive than smaller lizards.

Like their leopard cousin, crested geckos are fairly easy to look after. Once your gecko has become accustomed to you, they can enjoy being handled and have a calm disposition. But it’s important to remember that they have to be handled delicately since they’re quite small and can become anxious easily. They don’t have the classic adorable smiling face that leopard geckos have, but they are pretty small and therefore not intimidating. Because of their size and calm nature, they’re pretty cute lizards to keep.

Another positive to choosing a crested gecko over a leopard is that they don’t need to eat live food, so if you’re squeamish, they’re a much better option. They can live a healthy life based on vegetables and commercial mixes of powder. And while it’s good to give them live insects, it’s certainly not necessary to ensure they’re healthy.

Unlike some reptiles, crested geckos don’t have a lot of specific requirements for their habitat either. The average room temperature will be fine for your gecko, so additional heating will not be needed. As a rule, crested geckos do well in a variety of setups, so if you’re a first-time owner, then it’s quite easy to set up a suitable home. Since they’re tree dwellers, it’s better to make a taller enclosure rather than a wider one.

The downside to crested geckos is that they can drop their tail. While other geckos can drop their tail, it’s more common in crested. This occurs when they become particularly stressed, so you do need to be careful in handling them and keeping things calm. Dropping their tail won’t harm their health, but it won’t grow back in the way that a gargoyle gecko will, so it is important to remember. 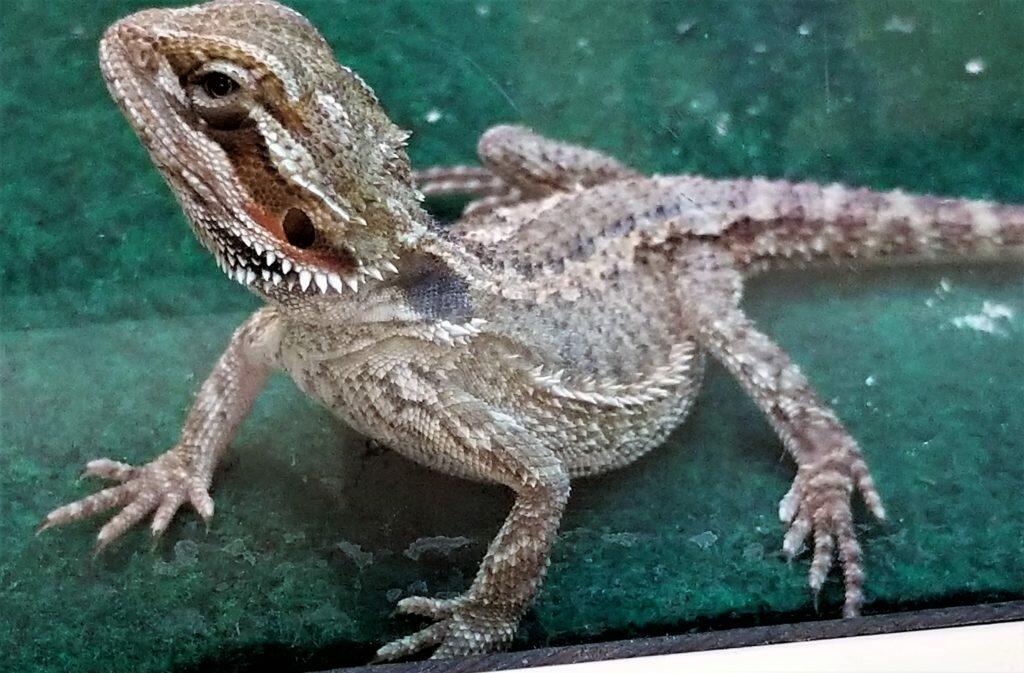 In terms of handling, uromastyx lizards are super relaxed like bearded dragons making them a great choice for a first-time owner. They’re a little more nervous than bearded dragons simply because they tend to burrow in the wild and therefore aren’t too keen on being out in the open. They can’t drop their tails as well, making them easier to handle and much sturdier than geckos. Uromastyxs are also easier to clean because their stool is dry, unlike bearded dragons, so in that sense, they’re much less maintenance.

Perhaps the best thing about Uromastyxs is that they’re vegetarian. Their diet consists of seeds and greens, so for first-time owners that don’t agree with meat-eating, then a uromastyx is the best option for you.

The only downside of a uromastyx is that they need a bigger enclosure than some other lizards and lots of places for them to hide. Uromastyx lizards also need a lot of heat, so you’re going to have to invest in more equipment. You will need pretty hot UVB lighting, and you’ll need a larger enclosure for them, so choosing this lizard does mean that their enclosure will be more expensive, but since you don’t have to buy meat for them, you’re saving money in other areas.

As the name suggests, these lizards have a unique blue tongue that is pretty impressive, and they’re known to be fairly intelligent and curious creatures. These lizards are a little bit harder to find, but a great option if you’re looking for a more uncommon reptile. Blue tongue skinks are calm and docile, making them a good choice lizard for first-time owners, and they’re active in the daytime, which is more entertaining for you.

They’re fairly easy to feed, being that the majority of their diet is vegetables, and while you should feed them a small amount of live insects, you can also feed them cooked meat.

Since they’re significantly bigger than geckos, they require a 40-gallon tank and do require a hot spot and UVB bulb, but they’re a sturdier pet. They also like to dig, so it’s important to factor that into your enclosure.

The downside to blue tongue skink is that they’re difficult to find. They’re live bearers, so they don’t birth many babies and therefore are tricker and more expensive to find. You can buy wild-caught, but it’s not advised.

Less common than a leopard gecko, African Fat-Tailed geckos also make great first reptile pets. They’re small and good for handling, but they perhaps need longer to get used to you than other lizards and perhaps need more gentle handling.

They’re just as cute and colourful as leopard geckos, and perhaps a great advantage to them is they’re a little more unique, which is great if you’re looking for a pet that’s a little different.

African fat-tailed geckos do take a little more work than leopards, but they also don’t need UV light, so they’re a much less expensive option than a bearded dragon. They do, however, need more humidity than a leopard gecko.

Just like the leopard gecko, they do, however, need live insects for their diet.

Hopefully, by now, you have a clearer idea of which lizard might be the best idea for your first-time pet. If you need any more advice on lizard care, check out our pages on what lizards eat and the best reptile humidifiers.