Driving With Dogs In Cars: What’s The Law?

Did you know that it is a requirement to safely restrain your dog in a moving vehicle?

Yet it is thought that many pet owners who regularly transport their pooch in their car both aren’t aware of the rules and fail to ensure their dog is both safe and unable to cause distractions.

If your dog were to distract you and you caused an accident, you could receive points on your license, fines or even disqualification. Any car or pet insurance could also become invalid, so it is really worth taking plenty of precautions.

What the law says about driving with dogs

Restraining your dog in the car when you are driving is not a legal requirement set out in legislation, and there are no penalties for not following sections of the Highway Code. Simply driving with an unrestrained dog cannot lead to prosecution in itself.

However, if something were to happen, such as you causing an accident through distraction, failure to comply with sections of the Highway Code may be used in evidence in court proceedings under the Traffic Acts to establish liability.

The Highway Code is not enforceable by law, but should always be followed to be safe

Even if you were not in an accident or near-miss, if you seem distracted or your dog looked like they were causing a bit of disruption, you could be pulled over by the police for ‘driving without due care and attention‘, which is simply defined as “allowing the standard of driving to fall below that of a competent and careful driver”.

This includes ‘carrying out other tasks while driving’, and ‘allowing yourself to be distracted by passengers in the car’ – both perfectly plausible when a four-legged friend is joining you on the journey

The above is bad enough, but in more serious cases it can lead to disqualification or 9 points. You can also be faced with a larger fine of up to £2,500 depending on the nature of the incident.

The worse the incident, the worse the penalty, but even 3 points is severe – and always remember that even the most minor of incidents on the surface could have been much, much worse.

Driving with dogs: What your insurance says

If your car was to be damaged in an accident through your lack of attention, or your dog was to become injured and required veterinarian treatment, you would be able to claim through insurance. Right?

In the vast majority of cases, your pet and car insurance would become invalid. Providers would reserve the right to not payout. You haven’t only not made sure that you are driving without the possibility of distraction but you also have not taken care and precaution over the safety of your pet.

Furthermore, a pet could injure other people in the car if they were to be thrown forward or to the side.

Always read your car and pet insurance fully to understand the rules, especially when travelling with your pet

Many car insurance policies generally say that any scenario where the Highway Code has not been followed is risking invalidation of your policy.

How to restrain your dog safely in a car

Rule 57 of the Highway Code states:

“When in a vehicle, make sure dogs or other animals are suitably restrained so they cannot distract you while you are driving or injure you, or themselves if you stop quickly. A seat belt harness, pet carrier, dog cage or dog guard are ways of restraining animals in cars.”

This is where the seat belt dog car harnesses come into play. They are seen as the best option, clipping into existing seatbelt ports and fully restraining your dog across their body. This will protect them from any sudden movement.

It is also a good idea to use a car seat cover in the form of a hammock, which will not only keep them stable but will also close off the footwell area so they can’t fall into it. If you have a smaller dog breed, a dedicated enclosed car seat could also be a good idea.

There should be enough slack on the seatbelt to allow your pooch to get comfortable (such as lying down), but not enough to allow them to stray too far from the seat.

When you shouldn’t travel with pets

Given all of the above, there are certain conditions under which DEFRA recommends you do not transport your pet. These include if:

The top point is the big factor here. If you are worried about your pet and they started to have issues while you were driving which caused you to become distracted or have to give them attention, getting caught could land you in serious trouble despite the situation. 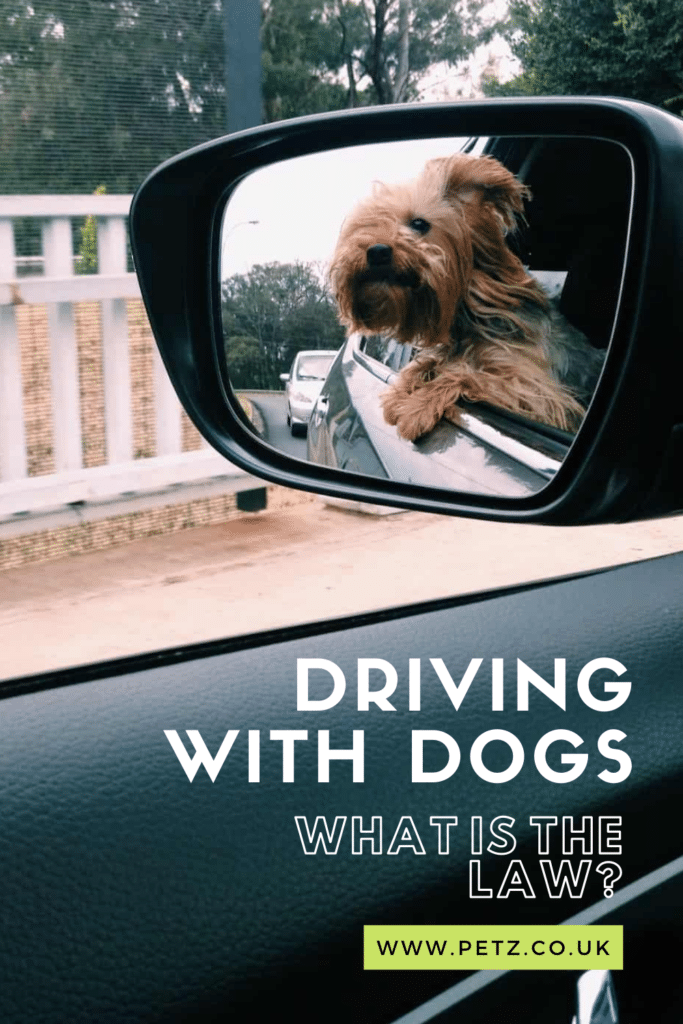