Scientific research has suggested that yes, dogs do dream while sleeping and that just like us humans, they mostly dream up imaginary experiences based on their day to day waking life.

Pups often display adorable twitches and woofs while sleeping in their bed, and so you’ve probably long assumed they must be having cute doggy dreams.

But unfortunately, our poor canine linguistic skills means we’ve never been able to outrightly ask them what they’re dreaming about or if they’ve even been dreaming at all.

Luckily for us, scientists have gone out and found the answers to our questions. Their evidence for doggy dreaming is incredibly convincing!

How do we know that dogs dream?

Dogs follow a very similar sleeping cycle to humans and go through several stages of sleep while at rest.

Rapid Eye Movement sleep, or REM sleep, is the stage in which humans experience the most vivid and memorable dreams, and it’s known that dogs also go through this stage when snoozing.

Occurring around 20 minutes into a napping session, REM is the point in a dog’s sleep where actions like twitching, growling and other funny things will occur, the very actions which lead us to believe they are dreaming.

And scientific studies on REM sleep have revealed that this is probably the case.

Studies on rats in 2001 showed that the brain-wave activity in mammals during REM sleep was incredibly similar to the patterns of activity shown while awake, suggesting that they were, in fact, experiencing a dream! 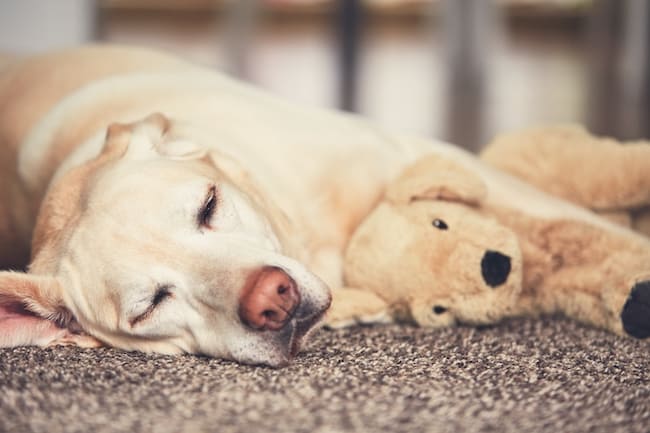 What do dogs dream about?

Scientific experiments have revealed that dogs mainly dream about situations that have happened, or might yet occur in their waking life. These range from the mundane to the extreme. 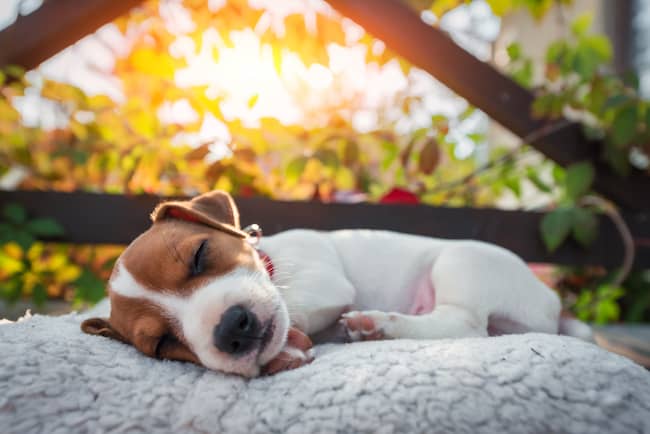 We know this is the case due to experiments involving the pons. This is a part of the brain stem which paralyses the muscles during sleep.

Without the pons, our bodies would be unable to determine that we were at rest, and so our muscles would probably act out everything we experienced while dreaming!

Which of course, would be a terrible, terrible thing.

But by temporarily disabling a pons’ paralysing properties, scientists have been able to get a deeper insight into doggy dreams during sleep experiments.

When disabling a dog’s pons, scientists found that canines began acting out their dreams despite being asleep!

The results involved everything we’d already suspected. Dreaming dogs spend most of their time barking at imaginary intruders and running after other animals.

Whether dog dreams ever get more imaginative and unusual is harder to decipher. Not even the most amazing of dog muscles can act out typical human dreams such as flying or falling!

But we’re sure those brainy scientists will discover the answer eventually.

Why do dogs twitch in their sleep?

While we now definitely know their twitches are caused by their dreams, the science behind it is once again to do with the pons!

As a result, puppies and older dogs will twitch and woof in their sleep more often than other pups, as the pons can’t totally prevent them from trying to act out their dream!

Of course, twitches can also still occur in normal adult dogs, but it’s really no different to a human occasionally talking or fidgeting in their sleep! 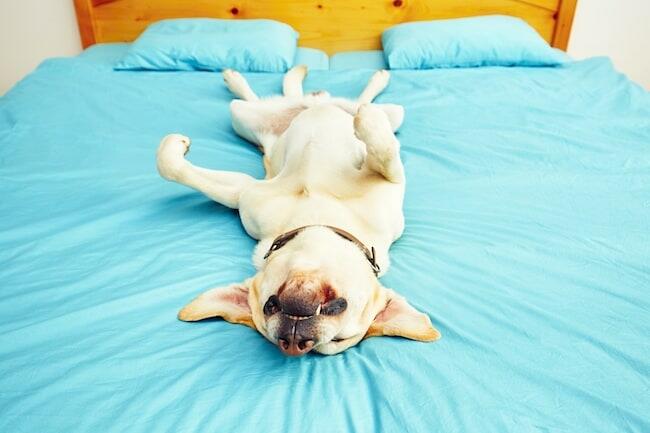 Does a dog’s breed affect dreams?

Although we can’t say for certain, it’s thought that a dog’s breed may actually have an effect on their dream states and also what they are actually dreaming about.

Researchers have suggested that the size of a dog is a factor in dream frequency and length, with smaller dogs supposedly dreaming more often than larger pups. But whereas bigger canines don’t dream as much, their individual dream episodes are much longer in duration than a smaller dog’s. 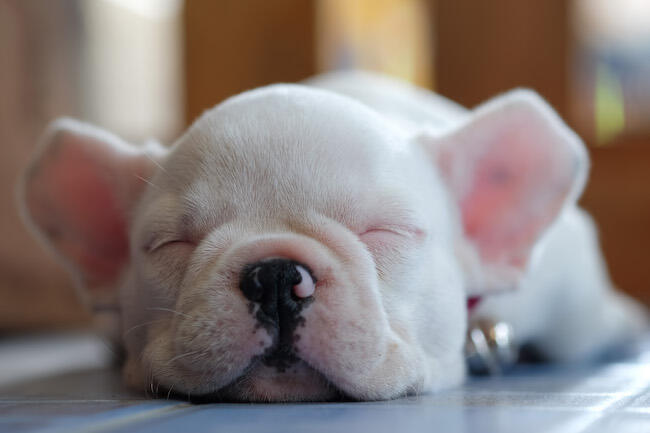 Can dogs have bad dreams?

We humans often suffer from the occasional nightmare or stressful dream, and so it’s only logical to assume dogs can also experience the same.

If your dog is making anxious or aggressive noises in their sleep, it’s highly likely they aren’t having a good dream, and it can sometimes be upsetting to watch.

Should I wake a dog up from a dream?

Never wake your dog up from a dream!

As your dog is in REM sleep, waking them up will likely be disorientating and confusing. By doing so, you risk your dog lashing out at you or acting aggressively, which can be dangerous!

Remember, whatever is upsetting them is just a dream and won’t hurt them, so why would you risk them hurting you.