Vegan Dogs and Cats: Is It Safe?

More and more people in the UK are choosing to cut down on meat, dairy and other animal products and adopt vegetarian or vegan diets.

But if you do adapt to this lifestyle and are a pet parent, it can make you feel uncomfortable feeding meat to your animals.

There is a lot of controversy around the subject, as both animals are evolutionary omnivores. Both vegan dog food and veggie cat food are rapidly rising in availability, though.

Many believe that pet food is an environmental disaster. It is thought to be responsible for a quarter of the environmental impacts of meat production in terms of the use of land, water, fossil fuels, phosphates and pesticides.

The growing wish to feed pets human-grade or raw food diets is creating even more pressure as people are becoming sceptical whether mass-produced dog and cat food are good for their fur babies.

But unlike humans, pets have not evolved to cut meat out. So there is a big question to be asked…

Can Dogs and Cats Be Vegan?

The real answer is simply that it is possible for dogs to be vegan, but less so for cats.

In general, dogs can be vegetarian or vegan with the right advice and guidance from a vet or other professional. But for cats, serving up food without meat or fish is not a good choice at all in the vast majority of cases.

In rare situations, a pet may have to be placed on a vegan diet if they are allergic to animal proteins or need to avoid certain ingredients

Both animals need certain vitamins, nutrients and benefits from food to ensure their body keeps going and they remain healthy. Meat is the easiest source to digest for them over vegetables, but a dog’s stomach is a lot more equipped to deal with non-meat sources.

Cats also need some nutrients and amino acids which can only be found from meats and haven’t yet been fully replicated in artificial ingredients.

While a lot of their natural diet stems from how they would have to live in the wild as opposed to living the life of luxury in your home, you still have to be aware of what their body can handle. 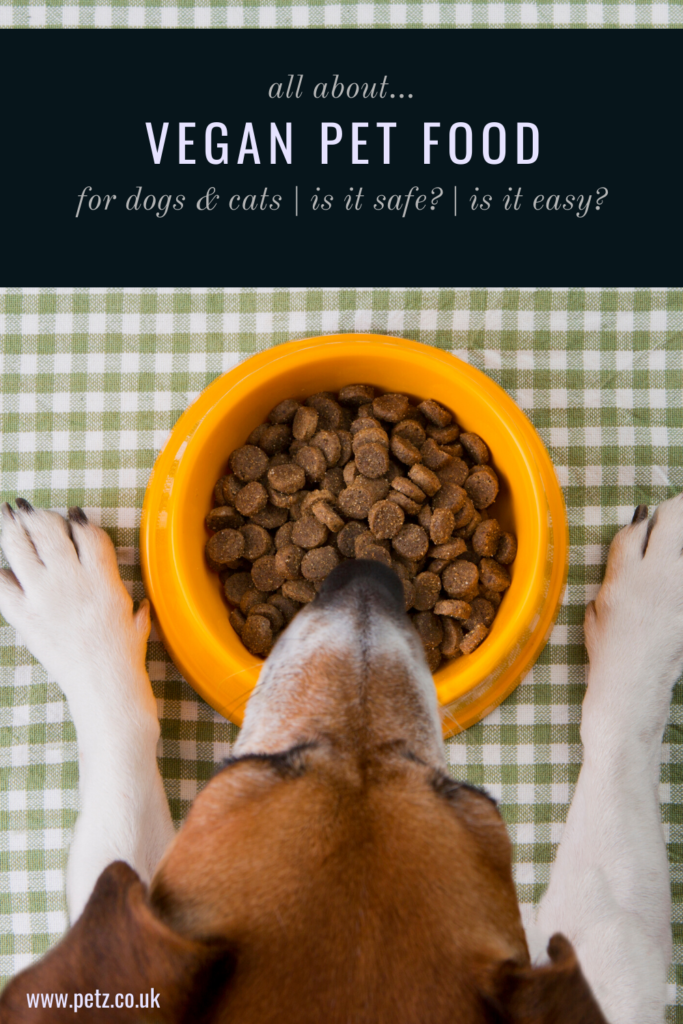 A cat is considered an “obligate carnivore” – that is, they are genetically obligated to hunt living food for their nutrition. They would once have lived in the desert and eaten anything from lizards and snakes to birds and insects in order to get a balanced range of proteins.

Even today, many can hunt small rodents and birds instinctively. If they do catch something, they will eat the whole animal in order to consume their daily energy intake and can regurgitate what they don’t digest (as many owners have likely experienced).

In the wild, they won’t hunt out grains, fruits or vegetables because they are pretty pointless. It isn’t what their bodies are built to survive on, and some can even be harmful. This is why many cat foods do not contain anything other than pure meat content.

Cats really need carnitine and taurine from meat in their food. They are essential for vision, the heart and the immune system, among other things. A lack of them can cause all kinds of problems with these organs.

Taurine is the big one here. They can’t produce it themselves, and it can only be found in meat, fish and insects. There are traces in some dairy products, but not to the extent to which cats need it for their health.

While many vegan cat foods will state that their recipes contain all of this artificially, they can be fussy creatures and decide not to eat it, which starts to cause a lot of issues. There may also not be enough in the food for their particular body and build – every cat and breed is different.

On the other hand, dogs would once have survived on a diet which was largely meat-based, but they would accompany this with some berries and fruits.

Unlike cats, they have amylase genes so they can digest starch and are classed more as scavengers. That is, they will eat what they can find as long as it is safe. Indeed, even though they’re members of the order Carnivora, they’re actually omnivores.

Pandas are also classed as Carnivora despite eating mostly bamboo!

They can also produce taurine naturally, from sulfur-containing amino acids, primarily cysteine, but also methionine. This means that they don’t technically need to source it as a cat would.

Many people claim that their dogs thrive on a meat-free diet. A canine digestive system is pretty hardy, so they are capable of digesting nutrients from various sources.

But it can cope with digesting meat a lot easier than vegetables, and while they don’t need as many overall nutrients from meat than cats, there is still a lot of beneficial content which would need to be replicated in a vegetarian or vegan diet as you will read below.

Is It Possible To Feed My Pet a Vegan Diet?

Despite not being recommended on a wider scale, there is a chance, yes.

It is vital to always follow the advice of your vet and never pursue a diet change unless recommended or approved. Transitions should be slow, and while mild digestive issues are possible, anything extreme should be seen to immediately.

For dogs, a diet without animal fats and proteins is potentially dangerous and should never be fed without the guidance of a professional. Just because they can live without meat, doesn’t mean they should.

Essential proteins from animal products (such as collagen, elastin and keratin) can be hard to come by in non-meat sources, so vegan dog food must be specially formulated to include this.

Some canines can actually be allergic or intolerant to certain non-meat ingredients, too, so you would need to keep an eye on their reactions to avoid skin problems or digestive issues developing.

Designing a meat-free diet with all of the necessary nutrients can be a challenge, but with more and more people looking into it, there are now a lot of options out there to buy. Dogs can safely eat a range of vegetables and other food sources, such as:

But there are dozens more which are toxic to dogs, and while commercial vegan food shouldn’t contain these, you need to research and ensure any homemade options don’t either.

There is a lot of room for error, and they’re overall not as appropriate as meat-based diets, but some dogs can indeed thrive on them.

For cats, they would only ever eat vegetables and other food sources in the wild if meat wasn’t available. It often doesn’t contain the proper amino acids and nutrients cats need to live a full and healthy life, so would only ever be a temporary emergency fix. Even then, it would be a rarity. According to professional advice, you should never feed your cat a vegan diet.

Numerous studies have proved inconclusive to the effects of vegetarian diets on cats, but one thing is agreed – it is incredibly hard to balance an animal-free cat diet. Much more so than with dogs. If a cat misses out on what they need, serious health complications can develop down the line.

A vegetarian cat diet certainly has no health benefits and can be incredibly hard to manage and monitor, so you may wish to rethink and consider a diet which doesn’t cause harm to your cat but is also ethical and sustainable.

You may be an ethical vegetarian or vegan, or doing it for health reasons. If your heart is set on giving your animal the same diet, bear in mind a few pointers and tips:

Veganism for cats and dogs is a complicated subject matter, but can often be summed up in short for most cases.

If you own a cat, it is really not recommended. The food out there at the moment can be very hit and miss in terms of overall nutritional value, and because many are so fussy, there is a good chance they will turn their nose up at any extreme diet changes.

Many professionals say cats should never, ever be fed a vegan or vegetarian diet, so if you aren’t comfortable giving your pet meat, it may be worth considering a herbivorous pet instead.

But dog owners may see their hound live a perfectly healthy life if vegetarian or vegan, as long as you are prepared to put in the work and the monitoring which comes with it. 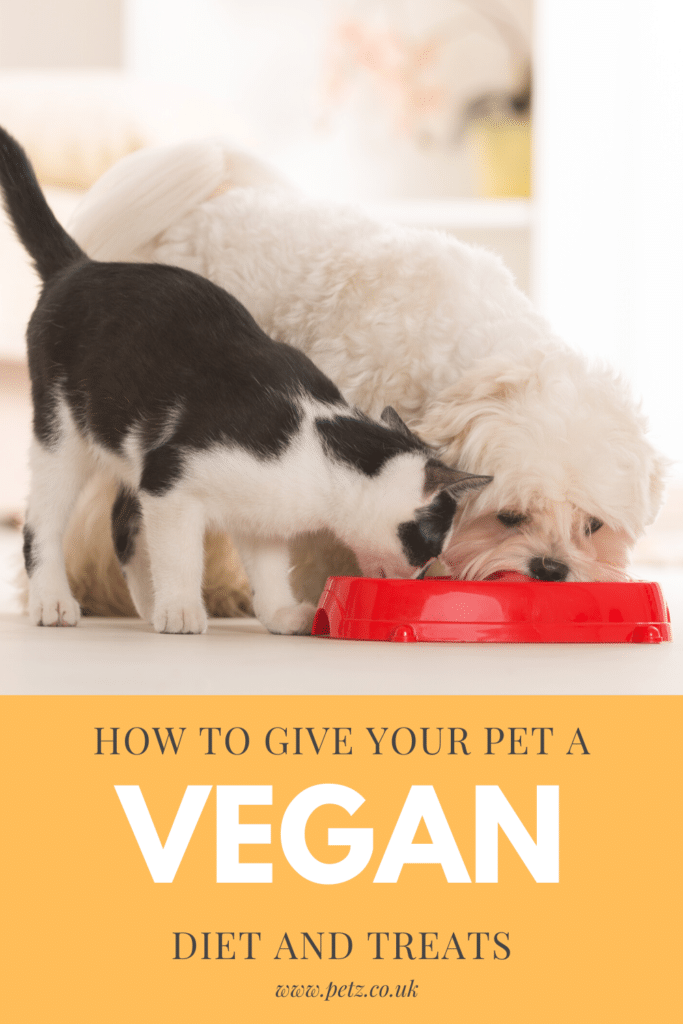